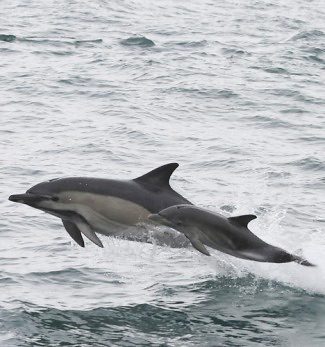 Best Birds and other wildlife in the Azores

Reptiles, Amphibians and Fish
Loggerhead Turtle, Hammerhead Shark and flying fish. The Azores are a popular game-fishing location since it is one of the best places in the world for Blue Marlin. Other large fish which are caught regularly or may be seen leaping out of the ocean include White Marlin, Sailfish, Spearfish, Swordfish, and Bluefin, Big-eye and Yellowfin Tunas (all mostly Jul-Sep). The islands are also popular with scuba-divers in search of Devil Rays, schools of which gather here from July to October, especially at Baixa do Ambrosio, Santa Maria, and Blue Sharks around the island of Pico from June to September.

Best Sites for Birds, dolphins, whales and other wildlife in the Azores

Boat trips, mainly for whales and dolphins, run out of the islands of Faial, Graciosa and Pico (Lajes des Pico). The Terceira-Graciosa ferry crossing is good for cetaceans and seabirds but the best place, especially for seabirds, is the Bank of Fortune off Gracisoa.

The endemic Azores Bullfinch occurs on the island of Sao Miguel only.

Best Times for Birds, dolphins, whales and other wildlife in the Azores

Sperm Whale, and Bottlenose, Common, Risso’s and Striped Dolphins are resident in the deep waters of The Azores but the main season lasts from mid-April to mid-October and the best time to go is August-September when Sperm Whales have calves. Spotted Dolphin is also present at this time, being a summer visitor present from June to September. Large whales such as Blue, Fin and Sei usually pass through in March-April.

Field Guide to the Birds of Macaronesia by E Garcia-Del-Rey. Lynx Edicions, 2011.

Birds of the Atlantic Islands by T Clarke. Helm, 2006.

Birding and Whale Watching Trip Reports for the Azores


Local bird and wildlife guides in the Azores


Accommodation for birders and whale watchers in the Azores

Some Organized Tours for birds, whale watching and other wildlife to the Azores

Tour companies who run organized tours to the Azores include the following. Many of these also offer custom tours.