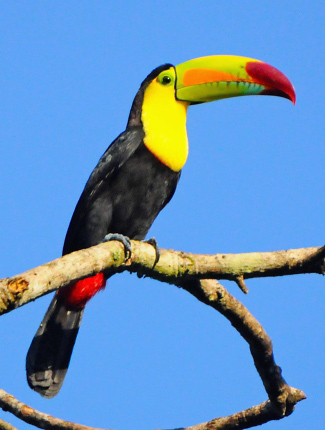 Best Birds and other wildlife in Belize

(The range of Yucatan Vireo includes the Belize Cays as well as Islas Cozumel and Mujeres, the Honduras Bay Islands and Grand Cayman in the Cayman Islands of the Caribbean)

Mammals
Bottlenose Dolphin, Yucatan (Black) Howler and Black-handed (Geoffroy's) Spider Monkeys, White-nosed Coati and 'Fish-eating' Bat. Also a chance of West Indian Manatee (on boat trips out of Belize City, to places such as Swallow Caye), Kinkajou and Tayra, and an outside chance of Jaguar (here at its highest density in Central America) and Ocelot.

Reptiles, Amphibians and Fish
500 fish species including Whale Shark (Apr-May, usually during full moons when they feed on the annual snapper spawning), Spotted Eagle Ray, Mirrowing Flying Fish and numerous coral reef fish on the 300 km (185 mile) long barrier reef. Also Green, Hawksbill and Loggerhead Turtles (all of which nest on offshore islands May to November), Striped Basilisk Lizard, and a chance of American and Morelet's Crocodiles, and Red-eyed Tree Frog (especially Jun-Jul).

Best Sites for Birds and other wildlife in Belize

Best Times for Birds and other wildlife in Belize

Any time during the dry season, which usually lasts from December-January to May, is a good time to visit Belize, with March, when many resident species nest, being the peak month to look for birds, and April-May the best time for Whale Shark. During the wet season most of the rain falls in the south of the country.

ABA Birdfinding Guide: A Birder's Guide to Belize by B Frenz. ABA, 2013.

Accommodation for birders in Belize

Some Organized Tours for birds and other wildlife to Belize

Tour companies who run organized tours or can arrange custom tours to Belize include the following.