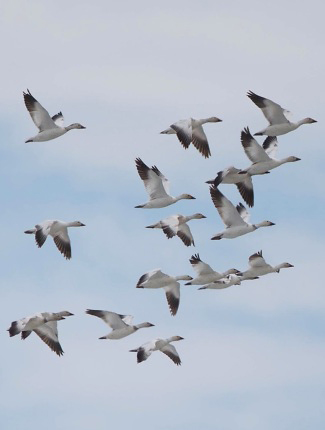 Best Birds and other wildlife in the Bosque del Apache area

Birds
The species listed below are usually present during the northern winter.

Mammals
A chance of Coyote.

Other Natural Wonders in the Bosque del Apache area

There are two loop roads around the refuge, and the refuge headquarters is also worth birding around, especially the trail into desert scrub just south of the refuge. The roads run through fields and wetlands with viewing platforms, some with telescopes. One such platform, near the HQ, is known as The ‘Flight Deck’ because it overlooks the lake where the geese usually roost, from where it is possible to watch the spectacular dawn ‘flyout’, as the geese leave the roost and fly out to forage in the surrounding fields.

The most birds are usually present from November to February. Around the Festival of the Cranes held every November, and Thanksgiving, the fourth Thursday of November, are as good a times as any to visit, although the area may be too crowded with birders for some during this period. Crane numbers usually peak at this time but the numbers of geese usually peak in mid-winter in January.

Accommodation for birders in the Bosque del Apache area

Tour companies who run organized tours or can arrange custom tours to Bosque del Apache include the following.