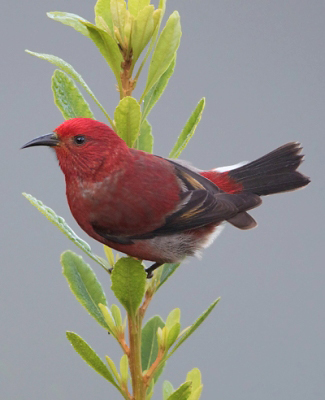 An Apapane in Koke'e State Park on the island of Kauai by Dubi Shapiro. 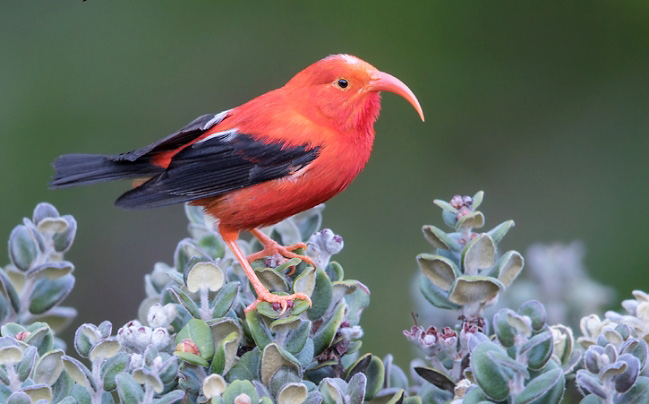 An Iiwi in Hosmer Grove, Haleakala National Park on the island of Maui by Dubi Shapiro.

Best Birds and other wildlife in Hawaii

There are also many introduced species.

Reptiles, Amphibians and Fish
It is possible to snorkel or scuba-dive with Manta Rays, (Pacific) Green Turtles (at known cleaning stations) and Whitetip Reef Sharks, as well as numerous spectacular coral reef fish. About 450 species of coral reef fish occur around the islands including the state fish which is one of two triggerfish known as Humuhumunukunukuapua’a, one of which is shown below. Also a chance of Leatherback Turtle.

Other Natural Wonders of Hawaii

Hawaii Volcanoes NP, Big Island Occasionally active lava flows spilling spectacularly into the sea, from Kilauea, one of the most consistently active volcanoes in the world, and a lava tube; a 120 m (400 ft) stretch of which is accessible to the public.

North Shore, Oahu Massive Pacific rollers, some of the largest waves in the world.

Best Sites for Birds and other wildlife in Hawaii

Best Times for Birds and other wildlife in Hawaii

Humpback Whales are usually present from November to May, with their numbers peaking from January to March. Seabird diversity and numbers usually peak from late February to April with Newell’s Shearwaters usually returning by mid-April. April is also the time when many forest birds are at their most active and attractive.

A Photographic Guide to the Birds of Hawaii by J Denny. University of Hawaii Press, 2010.

Hawai'i's Birds and Their Habitats by H D Pratt and J Jeffrey. Mutual, 2013.

Accommodation for birders in Hawaii

Some Organized Tours for birds and other wildlife to Hawaii

Tour companies who are running organized tours to Hawaii in the next couple of years include the following. Many of these also offer custom tours.