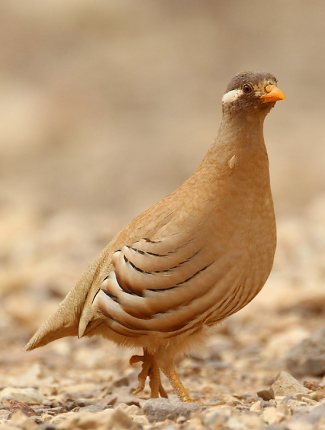 A fine image of the small Sand Partridge in the Arava Valley near Eilat by Dave Barnes.

Best Birds and other wildlife in Israel

Plants
There are about 2800 species of flowering plant in Israel, a remarkable total for such a small and mainly arid country. They include about 200 ‘bulb’ species including many superb irises and the top places to look for them include the Negev Desert, and Mounts Hermon and Gilboa.

Other Natural Wonders in Israel

The Dead Sea
At about 400 m (1300 ft) below sea level the shoreline of this inland lake is the lowest land in the world. The water in the lake is six times saltier than sea water.

Best Sites for Birds and other wildlife in Israel

Best Times for Birds and other wildlife in Israel

Spring bird migration usually lasts from March to May, and peaks from mid-March to early April, which also happens to be the best time to look for flowers. During March it is also possible to see some lingering winter bird visitors. Late March is the peak time for the greatest variety of species but later in spring is the best time to find the specialities, around the third week of April. Autumn bird migration usually lasts from September to November. During the northern winter December to February is the best time for birds.

A Guide to the Birding Hot-Spots of Southern Israel by H Shirihai et al. Society for the Protection of Nature in Israel, 2000.

A Guide to the Birding Hot-Spots of Northern Israel by H Shirihai et al. Society for the Protection of Nature in Israel, 2000.

eGuide to Birds of the Middle East.

Don’t know which country/countries/regions to visit in the Middle East and Asia? Then it may be worth considering taking a look at this book, written by this website’s author. It is many years old of course but it still provides a starting point, an overview and a guiding light to the best birds and the best places to look for them in the region, and could save hours of searching for similar information on the internet. However, it is important to check more up-to-date sources for sites which have been opened up, sites and species which have been discovered, lodges that have been built etc. since the book was published.

Accommodation for birders in Israel

Some Organized Tours for birds and other wildlife to Israel

Tour companies who run organized tours to Israel include the following. Many of these also offer custom tours.