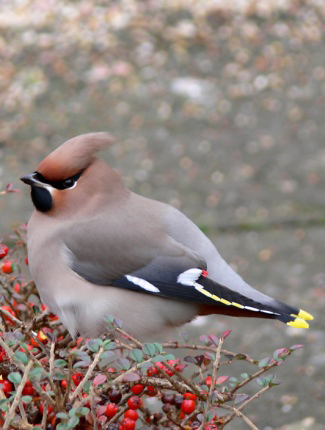 A Waxwing on my local patch by Alice Perry. Arguably the ultimate local patch bird for someone living in the UK.

It is wonderful to go on a wildlife adventure but it is not necessary to travel to the ends of the Earth to enjoy the wonders of wildlife. There may be plenty on your doorstep, no matter where you live. A true ‘local patch’ is of course one which can be reached on foot in a short time from your front door, preferably beginning on your doorstep, and one which it is possible to visit regularly, often enough to at least experience the changing seasons. The best local patches have the greatest variety of habitats, including some fresh or salt water, and the least disturbance, so if you don’t live anywhere such a place, move. It will be good for you, because, even if you are only slightly interested in wildlife, it will make you happier and healthier. The wise Henry David Thoreau knew this when he wrote Walden in the 1850s and said, ‘There can be no very black melancholy to him who lives in the midst of nature’ but now, over 150 years later, it is 'official', nature, the ‘great outdoors’, is good for you! Walking while watching wildlife is good for your physical and mental health.

As far as birds go a patch is a place to hone your birding skills, to familiarise yourself with the different plumages, at all ages from fledglings to adult males and females, as well as the calls, songs and behaviour of the relatively common birds. Once you know these it will be much easier to recognise the unusual. This takes a great deal of patience and persistence, for it is not possible to see everything on your first visit or your first forty visits. Don’t even expect to see everything in a year, even a few years, although after a while, maybe a few years, especially if you keep meticulous records and notes, not just of what you see but of other things like the weather, you should be able to build up a knowledge of what birds are relatively common, what birds are scarce migrants and what birds are rare, and in what weather conditions the unusual birds are likely to turn up. If you love your patch the first sight of a rarity may produce the same rush of adrenalin a rarity on some far flung island would, except this rarity is on your patch not someone else’s, and all the more satisfying for that. Finding a rare bird for example, on your patch. is just as good, if not better, than a finding a skulking waif from Siberia on an island where such rarities are, if not expected, certainly not unexpected. Such exciting finds are most likely during the bird migration seasons of spring and autumn, but also during severe winter weather when often spectacular cold-weather movements take place. Your patch may seem devoid of avian life one day, but ‘jumping’ the next, especially if there has been a ‘fall’, that is, a lot of birds grounded by unusual weather. Sometimes they may not be grounded, they may be passing overhead, a phenomenon known as visible migration or ‘viz mig’ as lovers of it like to call it, and this can be as exhilarating, if not more so, than an individual rarity. To enjoy such movements to the full though it is essential to learn bird calls, because migrating birds call a lot and if they are low enough you will be able to pick up all sorts. Day after day, week after week, you may see nothing new but this just makes the unusual even sweeter. It’s all relative; seeing a stoat can be as exciting as seeing a sloth, it just depends where you are.

Learn all you can, including bird calls and other animal sounds such as crickets and grasshoppers, and remember there is no substitute for in-the-field experience; the more time you spend in the field the more you will know your ‘field’. Even when it seems deadly quiet there is something to learn, perhaps something that will come in useful in the future, like that fleeting glimpse of a common bird you had which made it look like a rarity; next time you have that glimpse you won’t have to waste time following it up. Like when you thought the weather might produce a fall but it didn’t; next time you won’t get so excited and disappointed. Like when the weather you thought might produce a fall did produce a fall; next time you will want to get out there earlier!

When there are no rarities or even the promise of even something scarce the patch can still excite, because then there is the time to appreciate what is there all season or all year round, and there is usually something, be it a beetle a butterfly a bird or something else. It may be a day of special light and enhanced colours, the day you experience your best ever views of something, an early arrival, a late departure, it may be the day you see a family of birds, indicating a successful breeding season, it may be unusually high numbers of something, whatever it is, everyday is different and it is the unpredictable nature of nature which makes regular visits to the patch so exciting and uplifting. And it is not simply about just watching the wildlife, it is about seeing how the wildlife is getting on, on your patch, from year to year.

The knowledge that what you are watching and recording, what is making you so excited and happy, is just a short walk from your front door, makes all the experiences even more satisfying, and what's more, the more time you spend on your local patch the better you will understand nature. Follow in the footsteps of Gilbert White who observed the birds and other wildlife around a village in Hampshire, England, for over twenty years before his book The Natural History of Selborne was published in 1789 and became one of the bestselling books of all time, or John Alec Baker who wrote in The Peregrine in the 1960s, a book based on ten years watching the Peregrines which wintered near Chelmsford in Essex, eastern England, ‘... I have tried to ... convey the wonder of ... a land to me as profuse and glorious as Africa’. These two brilliant books could only have been written by local patchers, people who knew every nook and cranny of their patches and where they were most likely to see the residents and rarities.