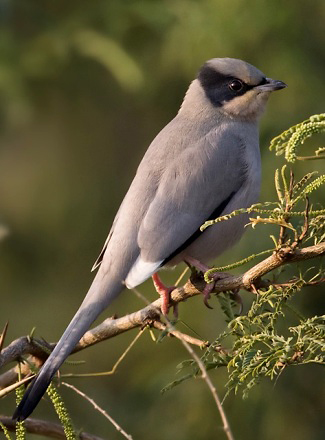 The unique Hypocolius by Lars Petersson.

Best Birds and other wildlife in Oman

These lists are for late October-early November.

Reptiles
Five species of turtle occur in Oman waters but the most likely ones to be seen are Green and Hawksbill Turtles, and these can be seen on their nesting beaches at Ras Al Hadd/Ras Al Jinz where there is a Scientific and Visitors Centre, complete with accommodation. The best times of the year are March-April for seeing Hawksbill hatchlings and June-August to see Green Turtles laying eggs.

Other Natural Wonders in Oman

Best Sites for Birds and other wildlife in Oman

Best Times for Birds and other wildlife in Oman

Summer temperatures in the interior desert can reach 130°F (54°C) so the best time to visit is between October and April when temperatures and humidity are lower, especially November to February for birds, although Sooty Falcons are usually only present until the end of October-early November during this period. The best time of year for seeing turtles laying their eggs on the beaches is July to September. Rainfall is usually irregular and light except in Dhofar Province in the southwest which lies within the reach of the Indian Ocean monsoon between June and September.

The Birds of Oman by M Gallagher and M Woodcock. Quartet Books, 1980.

eGuide to Birds of the Middle East.

Don’t know which country/countries/regions to visit in the Middle East and Asia? Then it may be worth considering taking a look at this book, written by this website’s author. It is many years old of course but it still provides a starting point, an overview and a guiding light to the best birds and the best places to look for them in the region, and could save hours of searching for similar information on the internet. However, it is important to check more up-to-date sources for sites which have been opened up, sites and species which have been discovered, lodges that have been built etc. since the book was published.

Many trip reports, some for Oman, are posted on the websites listed here. On some of these websites some reports are independent and some are posted by tour companies who organize tours to Oman. These tour companies and others also post their own reports on their websites, which are listed under 'Some Organized Tours to Oman' below.

Accommodation for birders in Oman

Some Organized Tours for birds and other wildlife to Oman

Tour companies who run organized tours to Oman include the following. Many of these also offer custom tours.