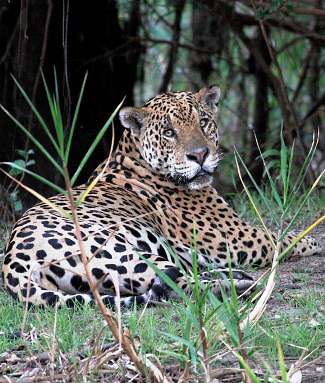 A magnificent Jaguar in the Pantanal by Chris Townend.

Best Birds and other wildlife in the Pantanal, Brazil

Best Sites for Birds and other wildlife in the Pantanal, Brazil

Best Times for Birds and other wildlife in the Pantanal, Brazil

The best time to look for Jaguars in the Pantanal is during Southern Brazil's dry season which normally lasts from July to October, especially August and September, although they are seen regularly at other times, often on river banks where they go to dry out after bad weather or lie in the shade during hot weather. Water levels in the Pantanal usually peak in February and begin to recede from mid-July onwards until the area is almost completely dry by the end of October. This period, especially September, is the best time for birds and some other wildlife, especially caiman, since they concentrate in huge numbers in and around the remaining waters. The maximum temperature in June-July is normally a relatively cool 30°C, but this rises to a peak of 40°C around mid-September.

Birds of Brazil: the Pantanal and Cerrado of Central Brazil by J A Gwynne et al. Comstock Publishing Associates, 2010.

Birding and Wildlife Trip Reports for the Pantanal, Brazil


Local bird and wildlife guides in the Pantanal, Brazil


Accommodation for birders in the Pantanal, Brazil

Some Organized Tours for birds and other wildlife to the Pantanal, Brazil

Tour companies who run organized tours or can arrange custom tours to Southern Brazil include the following.