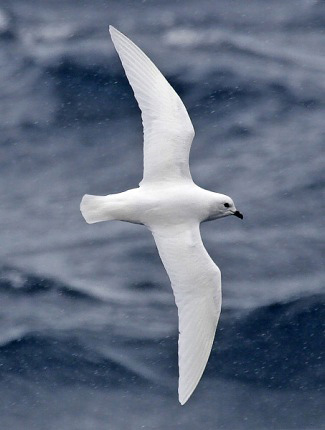 Snow Petrel by Alun Hatfield, a bird which can be seen on trips to Antarctica, South Georgia and the Falklands.

There are many tour companies who organize tours to see birds and other wildlife. The costs of these tours vary considerably according to such variables as the airlines used, the number of days the tours last, the number of sites visited, the number of people in the group (an important consideration if you wish to see such wildlife as rainforest mammals and birds), the number of tour leaders, the standard of accommodation and transport, and the percentage profit the company hopes to make. Generally, where the number of days tours last and the number of sites visited are similar, the cheapest tours are those that use the cheapest airlines, accommodation and local transport, that have the largest groups with the least number of leaders, and that make the least amount of profit. The most expensive tours tend to be those which are exceptionally long, use the most expensive accommodation (ridiculously lavish in some cases, even for single nights) and which make the most profit. Some tour costs partly reflect the quality of the tour leaders. Some leaders are certainly better than others and many companies claim their leaders are the best but even the best rely at least to some extent on the exceptional skills of the local guides they employ.

Local guides and tour companies are listed under Local Guides.

While tour companies organize tours with set itineraries many also organize custom tours for individuals and private groups who instead of taking a tour with a set itinerary want to follow their own itinerary to suit their own personal tastes, whether it be mammals, birds, other wildlife, other natural wonders or even man-made attractions, or a mixture of them all. Many organized tours with set itineraries are also fast-paced and target as many species as possible, whether they are mammals, birds or other wildlife or everything, which usually leaves little time to enjoy the best sites and individual species, but on a custom tour those taking part can specify the pace and the sites and species they wish to concentrate on. Custom tours also suit people who like to travel with people they already know, rather than with a group of strangers, and may be preferred by people with partners with different interests. Individuals and small groups will almost certainly have to pay more for a custom tour than an organized tour with a set itinerary but a large group of friends may be able to travel for less than the price quoted for a set tour.

Tour companies who run organized tours to at least a few destinations across the world include the following. Many of these also offer custom tours.

If you manage a tour company which runs organized tours across a continent or the world and would like Advertise Here With Us please click on this link.