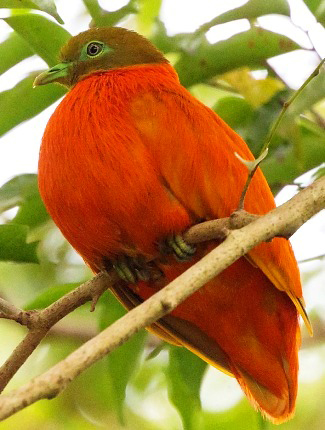 Orange Dove by Simon Colenutt. This fabulous bird can only be seen on the islands of Fiji.


Best Birds and other wildlife in Fiji 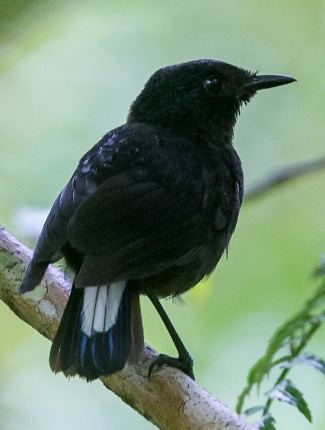 The strange Taveuni Silktail, in the fantails family, photographed by Simon Colenutt.

Other Specialities
Polynesian Triller and Polynesian Starling. Also a chance of Collared Petrel.

Mammals
A chance of Spinner Dolphin.

Fish
The amazingly diverse marine life includes about 1000 fish species, notably a fantastic range of coral reef fish, Manta Ray, and several species of shark including Hammerheads which are resident off Koro Sun Resort on the island of Vanua Levu, and Bull, Lemon and Tiger Sharks, all three of which can be seen while scuba-diving in Beqa Lagoon. The diving season is from April to October.

Other Natural Wonders of Fiji

Great Astrolabe Reef At over 120 km (75 miles) long this is the fourth largest barrier reef in the world. It is situated along the south side of Kadavu Island.

Best Sites for Birds and other wildlife in Fiji

Best Times for Birds and other wildlife in Fiji

The best time to visit Fiji is the cooler 'dry season' from May to October, when humidity is also lower, especially September, but this is the high season as far as prices go, although prices usually peak in June and July. Plankton blooms usually occur during April-May and/or November-December and may hamper visibility underwater so in between these times is the best for scuba-diving. The average temperature is a warm to hot 25°C, even 30°C plus at times in December-January. Rain falls year round, mainly in the form of showers, but especially from December to mid-April when cyclones also occasionally occur. Quick-dry shorts, t-shirts, a hat, sunscreen and sunglasses are recommended for the sunshine, a light waterproof jacket for the showers, and a fleece for the evenings. While snorkelling water temperatures are likely to be very comfortable but it is often best to wear a thin wet suit if in the water for longer than 30 or 40 minutes, and remember it is best to wear something while in the water anyway to provide some protection from the sun, stinging animals and sharp corals.

A Guide to the Birds of Fiji and Western Polynesia (including Tonga) by D Watling. Dick Watling, 2003 (Second Edition).

Butterflies of the South Pacific by B and H Patrick. Otago University Press, 2012.

Many trip reports, some for Fiji, are posted on the websites listed here. On some of these websites some reports are independent and some are posted by tour companies who organize tours to Fiji. These tour companies and others also post their own reports on their websites, which are listed under 'Some Organized Tours to Fiji' below.

Accommodation for birders in Fiji

Some Organized Tours for birds and other wildlife to Fiji

Tour companies who are running organized tours to Fiji in the next couple of years include the following. Many of these also offer custom tours.