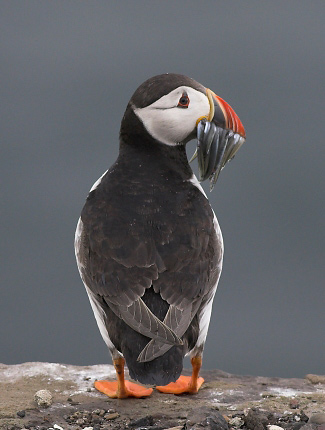 There are plenty of Puffins nesting on Newfoundland. This superb photo was taken by Tom Tams.

Best Birds and other wildlife in Newfoundland

Best Sites for Birds and other wildlife in Newfoundland

Best Times for Birds and other wildlife in Newfoundland

Humpback Whales usually arrive along the south coast during the late spring (June), following Capelin which gradually move north, along with the whales, along the east coast of Newfoundland, usually arriving in Witless Bay during July and remaining farther north along the east coast until September. Peak numbers of whales are normally present from late June to early August, but seabird numbers usually begin to fall by late July so the first two weeks of July are probably the peak time to visit Newfoundland.

Accommodation for birders and whale watchers in Newfoundland

Some Organized Tours for birds and whale watching to Newfoundland

Tour companies who are running organized tours to Newfoundland in the next couple of years include the following. Many of these also offer custom tours.