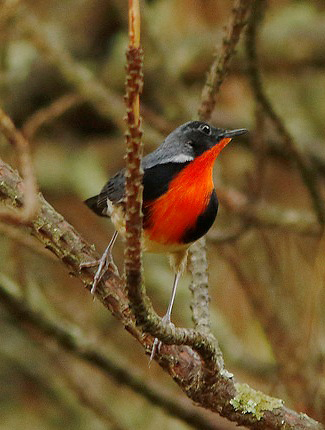 Best Birds and other wildlife in Sichuan

Birds
The birds listed here are usually present during the northern summer.

Also a chance of Koklass Pheasant and Black-capped Kingfisher.

Plants
One of the richest temperate floras in the world includes many spectacular rhododendrons, primulas and pedicularises, and is notable for its blue poppies, the black Primula euprepes (Zhedou Pass near Kangding), Chionocharis hookeri (Chola Pass near Dege) and Lilium regale.

Best Sites for Birds and other wildlife in Sichuan

Best Times for Birds and other wildlife in Sichuan

Mid-May to mid-June is usually the peak time to look for most birds, mid-June to mid-July for plants, and October to mid-November for mammals, notably Red Panda which forages in often bare small fruiting trees at this time of the year.

Accommodation for birders in Sichuan

Some Organized Tours for birds and other wildlife to Sichuan

Tour companies who are running organized tours to Sichuan in the next couple of years include the following. Many of these also offer custom tours.