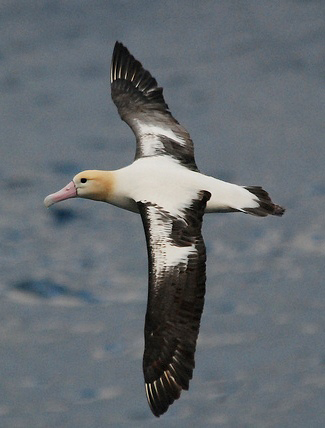 A Short-tailed Albatross off Torishima by Nigel Voaden.

Best Birds and other wildlife on the Western Pacific Odyssey

('New Caledonian Storm-petrel' (similar to New Zealand Storm-petrel) remained undescribed in 2021. It was believed at that time to range through the subtropical western Pacific as far west as the Brisbane Seamounts off eastern Australia)

Other specialities
Ijima’s Leaf-warbler (Izu and Tokara Islands, Japan, in summer, migrating south via Taiwan to the Philippines during the winter when rarely seen) and Micronesian Starling.

Field Guide to the Wildlife of New Zealand by J Fitter. Helm, 2010.

Birds of the Solomons, Vanuatu and New Caledonia by C Doughty, N Day and A Plant. Helm, 1999.

Whales, Dolphins and Seals: A Field Guide to the Marine Mammals of the World by H Shirihai. Helm, 2006.

Birding and Wildlife Trip Reports for the Western Pacific Odyssey


Bird and wildlife guides specializing in the Western Pacific Odyssey

Tour companies who are running organized tours to the Western Pacific in the next couple of years include the following. Many of these also offer custom tours.