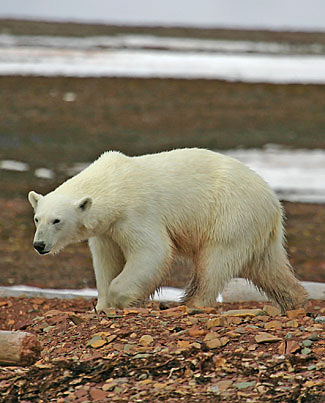 Best Birds and other wildlife in Arctic Canada and Greenland

Ships sail different routes between Canada and Greenland, most often between Baffin Island and Sondre Stromfjord, a 168-kilometre-long fjord in Greenland with an airport at Kangerlussuaq, the town at its eastern head. Passengers fly in and out of the embarkation and disembarkation ports on charter flights from cities in Canada such as Toronto. The actual route of each cruise then depends on ice conditions.

Other routes include the 'Northwest Passage', one of which travels from Greenland to Nunavut in Canada via Ellesmere, Devon, Beechey, Bathurst, Melville, Banks and Victoria Islands.

Some companies offer shorter cruises involving seven nights aboard ship travelling along the coast of Greenland only, usually out of Ilulissat or Asiaat and concentrating on Disko Bay, but Polar Bear, Walrus, Beluga, Narwhal and so on are not usually seen on these cruises which are geared more to the chance of Humpback Whales in spectacular scenery.

Cruises usually run in July-August when the ice has usually melted sufficiently to enable access to many of the best areas, although some cruises along the Greenland coast run as early as late May.

Birding and Wildlife Trip Reports for Arctic Canada and Greenland


Local bird and wildlife guides in Arctic Canada and Greenland

Accommodation for birders in Arctic Canada and Greenland

The most expensive cruises to the Arctic tend to be those on the largest and most lavish vessels, where every cabin has private facilities, but it is the smaller vessels, with much lower passenger numbers and mostly shared facilities, which usually enable greater and easier access to certain areas, and sometimes longer periods ashore.

Tour companies who run organized tours or can arrange custom tours to Arctic Canada include the following.