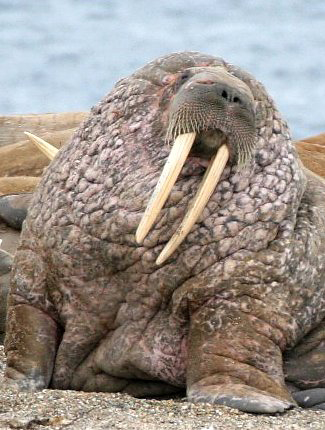 Best Birds and other wildlife on Baffin Island

Mammals
Narwhal and Ringed Seal. Also a chance of Polar Bear (mostly Sep-Oct), Beluga and Bowhead Whales (at the ‘floe edge’ which is the border between the solid ‘fast’ sea ice and the water, feeding along and under the ice as they wait to move further north), Arctic Fox, Arctic Hare, and Bearded and Harp Seals. (Walrus is highly unlikely to be seen at the floe edge but can be seen quite easily elsewhere on the island basking in the sun on small pans of sea ice over relatively shallow water where they forage for clams on the ocean floor).

Other Natural Wonders of Baffin Island

Best Sites for Birds and other wildlife on Baffin Island

Best Times for Birds and other wildlife on Baffin Island

June is usually the best time to be on Baffin Island but it is still very cold with temperatures probably between -10°C and +5°C, even lower at times taking into account the wind-chill factor, and it could snow, so warm layered clothing, waterproof boots and a warm outer suit are recommended. It is normally sunny though and the sun is up 24 hours, so sunscreen is essential.

Accommodation for birders on Baffin Island

Some Organized Tours for birds and other wildlife to Baffin Island

The most expensive cruises to the Arctic tend to be those on the largest and most lavish vessels, where every cabin has private facilities, but it is the smaller vessels, with much lower passenger numbers and mostly shared facilities, which usually enable greater and easier access to certain areas, and sometimes longer periods ashore.

Tour companies who run organized tours or can arrange custom tours to Baffin Island include the following.