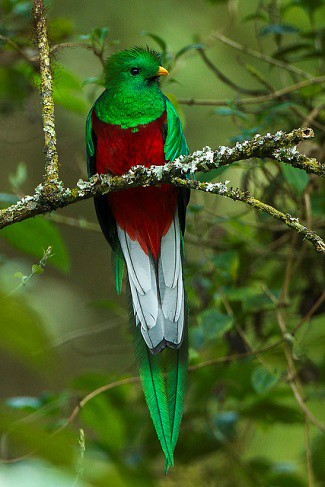 The aptly-named Resplendent Quetzal by Francesco Veronesi. A fabulous bird even though this particular individual does not have a full-length tail in which the central tail feathers may extend up to 65 cm (2 ft) beyond the rest of the tail!

Best Birds and other wildlife in Costa Rica

Invertebrates
Helicopter Damselflies (the largest dragonflies in the world), Hercules Beetle and many spectacular butterflies.

Other Natural Wonders of Costa Rica

Arenal Volcano One of the most consistently active volcanoes in the world, rising to 1657 m (5436 ft). Almost daily, lava and huge red-hot rocks tumble down the slopes and huge columns of ash rise from the crater.

Best Sites for Birds and other wildlife in Costa Rica 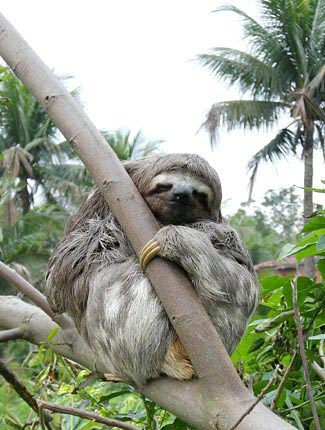 Best Times for Birds and other wildlife in Costa Rica

Rain is possible all year round in the mountainous centre of the country and along the Caribbean coast but Costa Rica as a whole is usually less wet between December and April and most birds can be seen during this time, especially in the driest months of February and March which also fall within the periods when Resplendent Quetzal (Jan-Jul, especially Mar-Jun) and Three-wattled Bellbird (Mar-Jun) usually nest, although the peak time to see Bare-necked Umbrellabird at the lek is mid-April to mid-May. The northern summer period, known as 'Green Season' in Costa Rica, sees fewer tourists, lower rates in many hotels and more frequent, often daily, rain.

Many other resident birds nest in June-July and despite this period falling in the wetter season this is also a good time to look for the quetzal (although it loses its long tail streamers at this time of the year) and bellbird, when quetzals usually migrate down the Pacific slope into less dense forest at Monteverde (mostly in June) and bellbirds normally congregate on the same slope (mostly in July). July is also the best time to look for Snowcap, when this hummingbird descends to lowland Caribbean forest, where Bare-necked Umbrellabirds usually spend their non-breeding season (Jun-Mar).

The best times to see turtles are July to December on the Pacific coast (when huge numbers of Olive Ridley Turtles usually come ashore around the last quarter of the moon each month, especially in September, October and November) and April to September on the Caribbean coast. The best time for whales is December and January.

Butterflies, Moths and Other Invertebrates of Costa Rica: A Field Guide by C L Henderson. University of Texas Press, 2010.

Accommodation for birders in Costa Rica

Some Organized Tours for birds and other wildlife to Costa Rica

Tour companies who run organized tours or can arrange custom tours to Costa Rica include the following.