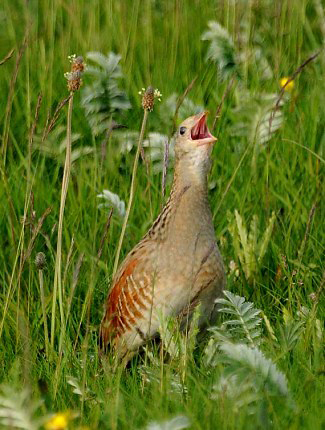 Best Birds and other wildlife in the Outer Hebrides

Specialities
White-tailed Eagle, Corn Crake, Black Guillemot and ‘real’ Rock Dove. Also a chance of White-billed Diver (appears to be a regular spring migrant, at least off the island of Lewis), Red-necked Phalarope, and, while seawatching in suitable conditions (a change of wind direction after wet weather fronts, from south/southwest to west/northwest), Manx Shearwater, European and Leach’s Storm-petrels, and Long-tailed and Pomarine Skuas (skua numbers usually peak during mid-May).

Mammals
(Eurasian) Otter, Common and Grey Seals, and Red Deer. Also, the Shiant Islands are the only place in the British Isles where Black Rat still occurs, apart from one to two small islands in the Firth of Forth.

Plants
The flora includes that of the machair; wind-blown shell sand mixed with peat, which is cultivated and sown with oats and potatoes in places, but full of many wild flowers elsewhere. Here and in other habitats such as bog and moor the plants include Early Marsh, Hebridean Marsh, Northern Marsh, Heath Spotted and Lesser Butterfly Orchids, and Common Twayblade.

Best Sites for Birds and other wildlife in the Outer Hebrides

South of South Uist lie the islands of Eriskay, Barra, Mingulay and Berneray, where similar species occur, and rarities are regular, especially on Barra.

Best Times for Birds and other wildlife in the Outer Hebrides

May and especially June is the best time to be in the Outer Hebrides. Corn Crakes usually arrive from late April, mostly from mid-May and are much more difficult to see after June. The first half of June is usually the time when the flower-rich machair of the Outer Hebrides is at its best.

Birding and Wildlife Trip Reports for the Outer Hebrides


Local bird and wildlife guides in the Outer Hebrides

Accommodation for birders in the Outer Hebrides

Tour companies who run organized tours to the Outer Hebrides include the following. Many of these also offer custom tours.