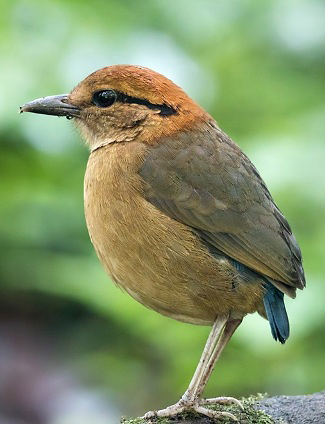 An amazing image of a female Schneider's Pitta, once one of the hardest birds to see on Earth, taken by Lars Petersson at Gunung Kerinci in April 2019.

One endemic which is not a forest-floor skulker is the Sumatran Cochoa, here captured by Mark Harper at Gunung Kerinci.

Best Birds and other wildlife in Sumatra

(There have been no recent records of Ruck’s Blue (Jungle)-flycatcher known only from four specimens, two of which were collected near Medan in 1917-1918)

Other Natural Wonders of Sumatra

Krakatoa This volcano is famous for one of the most massive eruptions known to man, an explosion which appears to have been heard as far as about 5000 km (3000 miles) away, on the island of Rodrigues near Mauritius, and about 3000 km (2000 miles) away in Perth, Western Australia! It occurred in 1883 and destroyed two-thirds of the island. Eruptions since have built a new island in the same location, already over 300 metres (1000 ft) high.

Lake Toba This is the largest lake in Indonesia and the largest volcanic lake in the world. It is about 100 kilometres (60 miles) long and 30 kilometres (20 miles) wide, and up to 505 metres (1666 ft) deep, and the result of a supervolcanic eruption that occurred 70,000–80,000 years ago, and which is believed to have been the largest eruption on Earth in the last 25 million years.

Best Sites for Birds and other wildlife in Sumatra

Best Times for Birds and other wildlife in Sumatra

May to September is normally the driest time of the year and July to September is the peak month to visit in search of most birds. Pittas are of course a different matter and February-March and July are arguably the best times for them.

A Field Guide to the Birds of Borneo, Sumatra, Java and Bali by J MacKinnon. OUP, 1993.

A Field Guide to the Birds of Peninsular Malaysia and Singapore by A Jeyarajasingam. OUP, 2012. (Second Edition).

Accommodation for birders in Sumatra

Some Organized Tours for birds and other wildlife to Sumatra

Tour companies who run organized tours or can arrange custom tours to Sumatra include the following.