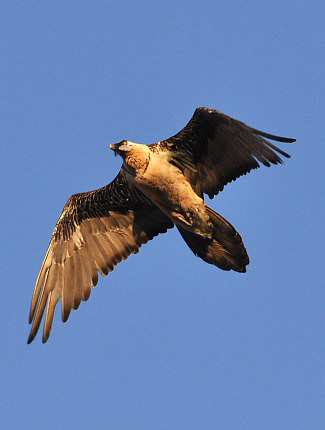 The huge Lammergeier by Jon Hornbuckle.

Best Birds and other wildlife in Northern Spain

Birds
The lists below are for the northern spring and summer unless otherwise indicated.

Invertebrates
The Pyrenees supports one of the highest diversities of butterflies and moths in Europe, including Apollo, Clouded Apollo, a great diversity of blues and fritillaries, Spanish Moon Moth and Giant Peacock. During mid-July it is possible to see 120 species of butterfly in a week.

Plants
The rich flora of the Pyrenees includes many orchids.

Best Sites for Birds and other wildlife in Northern Spain

Best Times for Birds and other wildlife in Northern Spain

The peak time to visit Laguna de Gallocanta for cranes is usually late February when the greatest numbers are normally present – between 20,000 and 50,000, prior to their northbound migration over the Pyrenees to their breeding grounds in northern Europe. This is also a good time to look for wintering Wallcreepers in the Sierra de Guara. The best time for butterflies and flowers in the Pyrenees is mid-June to the end of July, which is also a good time for birds although mid-May to mid-June is usually the peak time for birds during the summer.

Where to watch Birds in Northern and Eastern Spain by E Garcia and M Rebane. Helm, 2017 (Third Edition).

Where To Watch Birds In The Western Spanish Pyrenees by G Critchell. G Critchell, 2012.

A Birdwatching Guide to the Pyrenees by J Crozier. Arlequin Press, 1998 (2001 Reprint).


Accommodation for birders in Northern Spain

Some Organized Tours for birds and other wildlife to Northern Spain

Tour companies who run organized tours or can arrange custom tours to Northern Spain include the following.