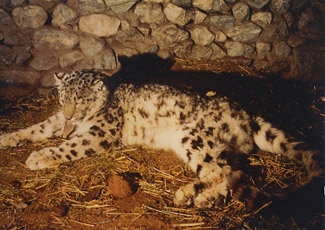 A Snow Leopard which ate two goats being kept in a stone hut, and which slept in the hut afterwards. The photograph was taken near Skardu in North Pakistan in late 1985 by Kazmi, a forestry officer, while Rob Roberts and Nigel Wheatley were taking a break from looking for Snow Leopards there! They were in India and Nepal, waiting for the snow to push them lower.


Best Birds and other wildlife in Ladakh, Northwest India

Best Sites for Snow Leopards, birds and other wildlife in Ladakh, Northwest India

Best Times for Snow Leopards, birds and other wildlife in Ladakh, Northwest India

The best time to look for Snow Leopards is from mid-September to late March, although it can be extremely cold in December and January, and the very best time is February to mid-March, before their prey, mainly Blue Sheep and Urial, begin to climb higher in search of fresh grazing as the snow melts, and the second half of November when the prey usually descend to avoid fresh snow. Early March is also during the mating season when Snow Leopards call to each other, thus improving the chances of locating one. It is likely to be very cold at these times, with biting winds and snow may fall at any time, although for much of the winter it is often sunny. Nighttime temperatures are usually between -8°C and -15°C but can fall as low as -20°C hence essential equipment includes Thermarest mat, 4-season sleeping bag, down jacket, waterproof jacket, waterproof over-trousers, fleeces, thermal underwear and top quality walking boots.

Field Guide to the Birds of Nepal by R Grimmett, and C and T Inskipp. Helm, 2016 (Second Edition).

Some Organized Tours for Snow Leopards, birds and other wildlife to Ladakh, Northwest India

Tour companies who run organized tours or can arrange custom tours to Northwestern India include the following.