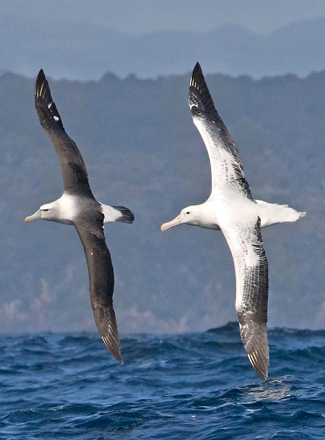 A rare and brilliant image of Shy and Southern Royal Albatrosses together, taken on a pelagic boat trip off Stewart Island, New Zealand by Lars Petersson.

The destinations listed and linked below are the ones we believe are the best in the world to see albatrosses.

For other types of birds see those linked below ...

Antarctica, South Georgia and the Falklands
Wandering, both Royal, Light-mantled, Black-browed and Grey-headed, plus millions more other seabirds help make this A Top Ten Destination.

Chile
Buller's and Salvin's, plus a chance of Wandering, both Royal and Chatham on boat trips out of Quintero, and Black-browed around Tierra del Fuego.

Falkland Islands
Colonies of Black-browed and a chance of Wandering, both Royal, Shy and Grey-headed in rough weather.

Galapagos
Colonies of Waved Albatross and lots of other seabirds.

Hawaii
A colony of Laysan and a chance of Black-footed (about a million of which nest on the remote Midway Atoll).

Japan
Black-footed and Laysan, plus a chance of Short-tailed.

Kamchatka (and the Kuril and Commander Islands) - Russia
Laysan, and a chance of Black-footed and Short-tailed.

Peru - Southern
Waved Albatrosses on boat trips out of Lima on which it is also possible to see Swallow-tailed Gulls.

South Africa - Western
White-capped (Shy), Black-browed and both Yellow-nosed, plus a chance of Wandering and Northern Royal.