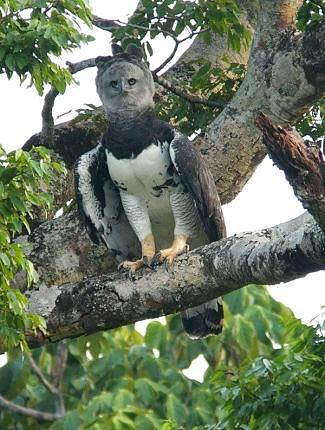 The world's most powerful bird of prey the Harpy Eagle is a rarely seen rainforest bird. This one was photographed by Chris Townend in Southern Brazil but Eastern Venezuela is arguably the most reliable place to see one.

The destinations listed and linked below are the ones we believe offer the best lowland tropical rainforest experiences in the world.

Lowland tropical rainforests occur near the equator, mainly in the Amazon, the Congo, Indonesia and New Guinea, and do not include the wet but semi-evergreen seasonal forests of Central America, the Caribbean, parts of South America, coastal West Africa, parts of the Indian subcontinent, and Southeast Asia.

Amazon (Brazil)
The largest river in the world, flowing through the richest rainforest in the world, alive with albeit mainly secretive monkeys, marmosets, macaws, manakins, cotingas and hundreds of other birds.

Australia - Eastern (Queensland)
A small area of rainforest which supports Southern Cassowary, Victoria's Riflebird (a bird of paradise) and bowerbirds.

Borneo - Malaysia
Wonderful old rainforests which are home to Orang-utans, Bornean Gibbons and many beautiful birds including hornbills, broadbills, trogons and pittas which help make this A Top Ten Destination.

Brazil - Southern
Some rainforest, where Harpy Eagle is possible, and the Pantanal, where there is a great chance of seeing a Jaguar.

Ecuador - Northern
Amazonia reaches eastern Ecuador where there are monkeys, marmosets, macaws, manakins, cotingas, antbirds and hundreds of other birds.

Gabon
'Western Lowland Gorillas', a chance of Chimpanzees and Mandrills, and many great birds including Red-headed Picathartes.

Peru - Northeastern (Iquitos)
Over 600 bird species in a small area of Amazonia including macaws, manakins, cotingas and antbirds, as well as marmosets and monkeys.

Sri Lanka
Confined to the southwest of the island this is where most of the 30 endemic birds occur, including Red-faced Malkoha and Serendib Scops Owl.

Venezuela - Eastern
Some rainforest, where Harpy Eagle is possible, and the Escalera, a great place for cotingas.