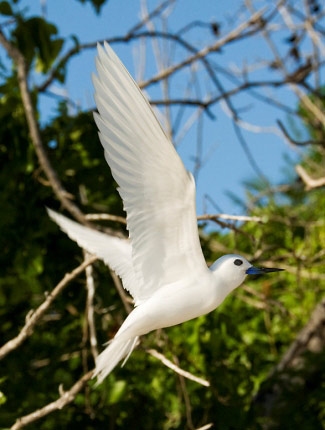 A beautiful White or Fairy Tern, the classic tropical island bird, around the equator in the Atlantic, Indian Ocean and Pacific, photographed by Mike Hunter on the Seychelles.

ISLANDS
The best in the world for birds and other wildlife

The destinations listed and linked below are the ones we believe are the best small islands for birds and other wildlife in the world.

Arctic Russia
Polar Bear, Walrus and Musk Ox, as well as Snowy Owl and other birds on remote and rarely visited Wrangel Island.

Bahamas
One of the best places in the world to swim with dolphins, as well as sharks and Sting Rays.

Commander Islands- Russia
Numerous Northern Fur Seals and Steller's Sealions, forming one of the greatest concentrations of marine mammals in the world, and as many seabirds, on the Commander Islands in the Bering Sea, accessible on cruises which also visit Kamchatka and the Kuril Islands.

Polynesia
Island paradises with lots of seabirds and endemic landbirds such as Tuamotu Sandpiper.

South Georgia
One of the greatest concentrations of life on Earth; fur seals, Southern Elephant Seals, penguins, albatrosses and millions of other seabirds including Snow Petrels, all in one of the most amazing settings on Earth make this A Top Ten Destination.

Subantarctic Islands - New Zealand
A wonderfully wild part of the world where there are Southern Elephant Seals, fur seals, penguins, albatrosses and millions of other seabirds as well as the very rare Shore Plover on the Antipodes, Auckland, Campbell, Macquarie, Snares, Bounty and Chatham Islands.

Indonesia - West Papua
Fantastic birds-of-paradise including Wilson's and Red on the islands of Batanta and Waigeo in the Rajat Ampat archipelago surrounded by the richest coral reefs in the world!

Yap - Micronesia
One of the best places in the world to snorkel or scuba-dive with Manta Rays, five endemic landbirds and seabirds such as White Tern.