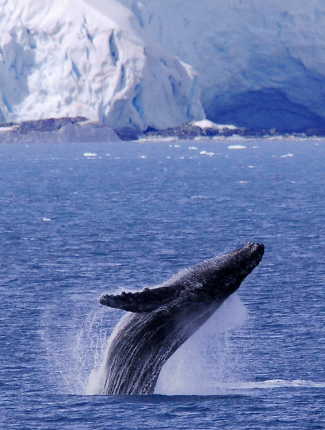 A spectacular photograph of a Humpback Whale breaching in Antarctica by Marie-France Grenouillet.

Alaska
Belugas in Turnagain Arm, Humpbacks and Killers in Kenai Fjords NP, and Humpbacks in the remote Unimak Pass in the Aleutian Islands.

Alaska - Southeast
Humpbacks bubble-net feeding, as well as a chance of Killers.

Baffin Island - Canada
The best place in the world to see Narwhals, plus a chance of Belugas and Bowhead Whales.

British Columbia (Western Canada)
The greatest concentration of Killer Whales in the world, plus Humpback and Grey Whales help make this A Top Ten Destination.

California (Northern) - USA
A good chance of Blue and Humpback, with Grey and possibly Killer and Fin.

Canada - Newfoundland
The largest northern summer numbers of Humpback Whales in the world, sometimes very close inshore, and a chance of Fin and Minke.

Chile
A chance of Blue Whales off the Isla de Chiloe as well as Humpbacks.

Dominican Republic
One of the few places in the world where it is possible to swim with Humpback Whales. Also a chance of seeing Sperm, False Killer and Pygmy Sperm Whales.

Hawaii
Humpbacks from land and sea, as well as False Killer and Short-finned Pilot Whales, and a chance of Sperm, Cuvier's Beaked, Melon-headed and Pygmy Killer Whales.

Iceland
Killer and Minke Whales, and a chance of Blue and Humpback.

Massachusetts - USA
Lots of Humpbacks on the Stellwagen Bank, and a chance of Fin, Long-finned Pilot and Minke Whales.

New Zealand
Sperm Whales off Kaikoura, and a chance of Killers.