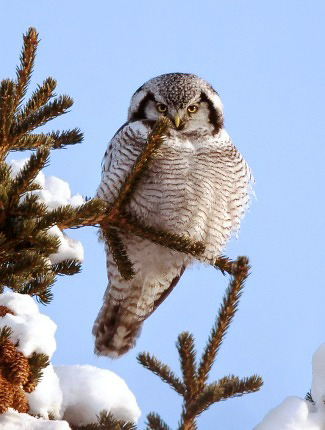 It is important to time visits to Scandinavia to look for owls very carefully. The best time to look for most of them (with local guides) is through May to early June, although Simon Colenutt was fortunate to see this Hawk Owl near Nesseby in Norway in late March.

In order to maximize chances of seeing the best birds and other wildlife at each of the Destinations described on this website it is important to visit them at the right time of the year. For example, whales, wildebeest, Whale Sharks, Great White Sharks, Grizzly Bears, turtles and many birds are only likely to be in certain places at certain times of the year, and even wildlife such as Gorillas, Orang-utans, Giant Pandas, Tigers, Wolves and lemurs, which are present at certain destinations all year round, are best looked for at certain times of the year, such as dry seasons, or, in the case of many birds their breeding seasons, when they are at their most active and attractive. However, while there are definite peak times for many destinations some may be just as good in the weeks and even months surrounding the periods recommended below. For more details click on the destination name. This will take you to one of the 150 pages devoted to single destinations or to the Destinations A-Z where there are summaries for the other destinations.

For more information see the list of best 100 Birds, best 100 Other Wildlife and best 50 Other Natural Wonders.